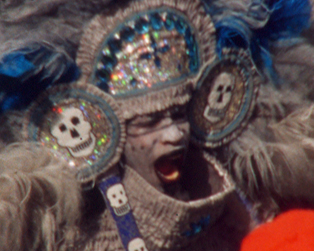 This film screened on 7th November 2019.

The screening was followed by a Q&A with director Moira Tierney, hosted by Dr Paula Gilligan of IADT.

Defying a highway overpass that divided their neighbourhood, the Mardi Gras Indians reclaim their territory by painting murals and continuing masking traditions in an assertion of cultural identity. With their black neighbours, they create an alternative version of their history, referring to the Civil Rights movement and the Maroon tradition that united runaway slaves and Native Americans. Their efforts build to a celebratory climax and a proud display of cultural resistance as they proceed down Claiborne Avenue on Mardi Gras Day.