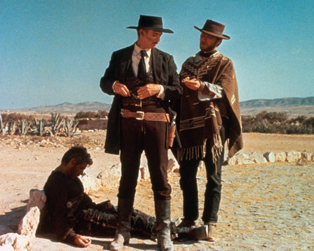 Following the success of A Fistful of Dollars, Leone and his producer rushed to get a sequel into production once Eastwood agreed to return.

Here, he is Manco, a bounty hunter forced to team up with rival Colonel Mortimer (Lee Van Cleef) in pursuit of the psychotic Indio, ruthless leader of a band of outlaws.