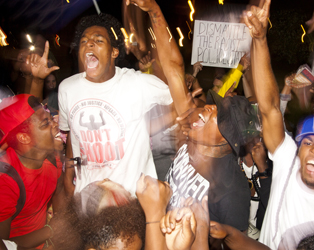 The shooting of unarmed teenager Michael Brown by police in Ferguson, Missouri in 2014 triggered mass demonstrations and rioting; the incendiary Whose Streets? captures the escalating situation with an in-the-moment immediacy, incorporating the perspectives of both newly-radicalised protestors and ordinary residents unintentionally caught up in an international news story.

The film chronicles how the Ferguson flashpoint informed the nascent Black Lives Matter activist movement, and exposes the deep-seeded tensions between the US police and the African American community.