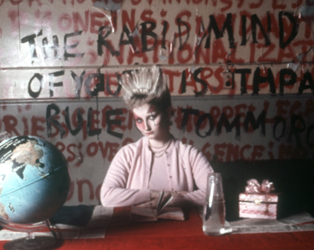 This film was screened on 5th December 2019.

Queen Elizabeth I (Jenny Runacre) is transported into the future by her mysterious occult aide Dr John Dee (Richard O’Brien), and the pair finds themselves in the anarchic Britain of the 1970s, where crime and disorder plague the streets, and Queen Elizabeth II has been killed in an arbitrary mugging. As they move through the social and physical decay of London, Elizabeth and Dee observe the activities of a group of young punks memorably played by pop culture icons of the era, including Toyah Willcox, Adam Ant and Vivienne Westwood. Bravely anti-establishment in its haunting vision of a social wasteland, Jubilee rails against the monarchy, moral corruption and big-business obsessed Britain.