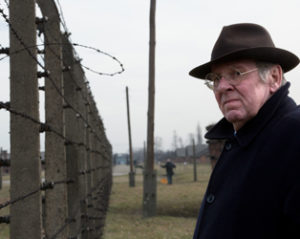 In 1996, Deborah Lipstadt (portrayed here by Rachel Weisz), a historian specialising in the study of the Holocaust, was sued by fellow historian and Holocaust denier David Irving for comments made about him in one of her books which he considered to be damaging to his professional reputation. As Irving filed suit in the United Kingdom, where the burden of proof is placed on the accused, the onus was placed on Lipstadt and her legal team to prove the falseness of Irving’s claims in a case whose verdict could have been interpreted as a judgement on the truth of the Holocaust in a court of law.

Scripted by Sir David Hare, the cast also includes Timothy Spall as the reptilian Irving, and Andrew Scott and Tom Wilkinson as the solicitor and barrister on whose shoulders rests this awesome responsibility.