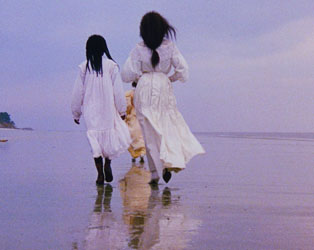 Restored for its 25th anniversary in 2016, Julie Dash’s seminal Daughters of the Dust was reissued to coincide with the release of Beyoncé’s visual album Lemonade, a work which draws greatly on Dash’s powerful imagery as a source of inspiration. The first feature directed by an African-American woman to get a theatrical release in the US, the film is set in 1902 on St Simon’s Island off the coast of South Carolina where an extended Gullah family – descendants of enslaved Africans – prepare to resettle on the mainland.

Dash refrained from what she described as ‘the typical male-oriented western-narrative structure’, instead allowing the story to ‘unravel and reveal itself in a way in which an African Gullah would tell the story’. As such, this evocative film evenly devotes its attention to a range of predominantly female characters who all speak in the wholly immersive, un-subtitled Gullah dialect.