DARK SKIES: INVASION: THE WAR OF THE WORLDS

H.G. Wells’ 1897 novel of a devastating global Martian attack is updated to ‘50s California in Byron Haskin’s enduring cold war classic, an Oscar-winner for its then innovative use of special effects.

Professor Clayton Forrester (Gene Barry) witnesses what he assumes to be a meteor crashing close to his home, out of which emerges a hovering Martian craft which proceeds to obliterate everything in its path, one of many such extra-terrestrial war machines appearing across the country in what becomes a war for the survival of humanity. 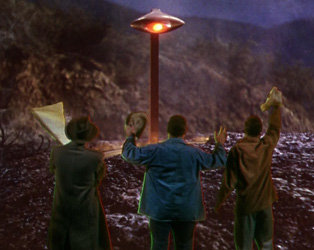