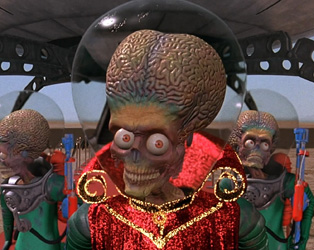 Tim Burton’s irreverent love letter to his precious ‘50s sci-fi B-movies was – then and now – an expensive, deliriously over-the-top folly; there is a sense of a lucrative director being indulged, but for all that, Mars Attacks! stands as a breathlessly entertaining romp.