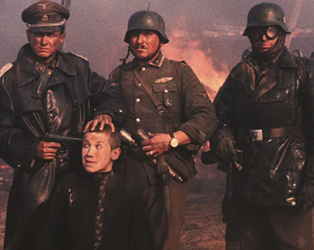 This screening was  introduced by Frank Berry, writer-director of Michael Inside and I Used To Live Here.

The final film from Russian director Elem Klimov (whose wife Larisa Shepitko’s The Ascent was recently screened as part of this series), Come And See follows Florya, a young boy in Belarus in 1943, when the Nazis began to invade. Determined to fight with the partisan forces against those attempting to occupy his homeland, he is instead forced to remain behind in the camp. There he meets young nurse Glasha. The two escape a sudden German attack and make for Florya’s village, after which they endure a further series of encounters with
partisans, Nazis, and collaborators.

An extremely powerful and harrowing film that is utterly unflinching in its depiction of the horrors of battle, its
mixture of lyricism and nightmare makes for an unforgettable experience, and is an incontrovertible reminder of the cost of war to its participants.