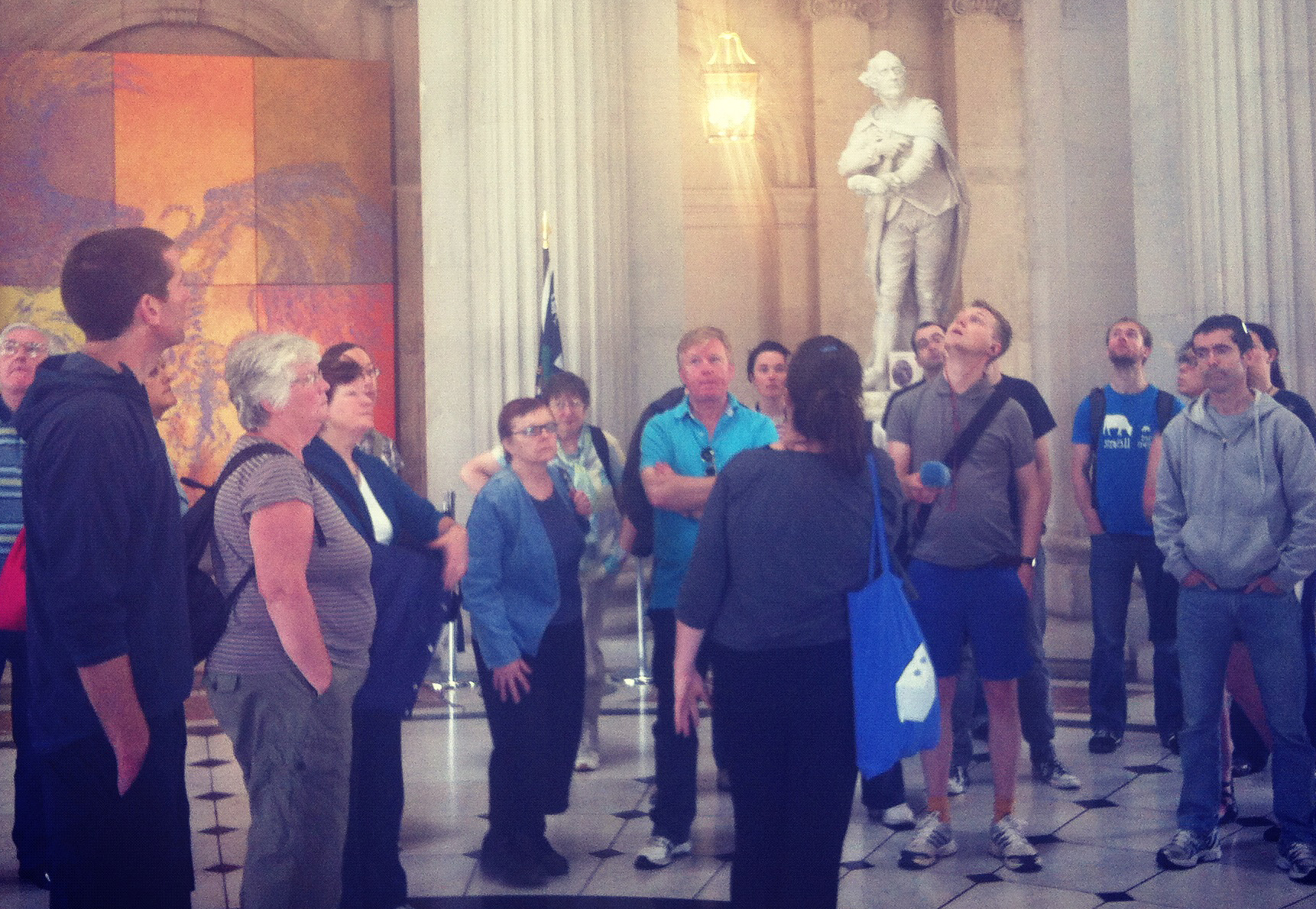 Today we’re taking a look back through the archives to a blog post from August 2012 when then IFI Curator Sunniva O’Flynn wrote about the Dublin Plays Itself Walking Tour. Here, you can get an idea of the architectural and movie treasures which await the lucky few who will get tickets to the 2017 event – taking place on Saturday July 1st. There are still a few places available in the afternoon session.

Dublin Plays Itself – an exciting project devised by the IFI and the Irish Architecture Foundation.

We could have asked for no more perfect a day than last Saturday when the sun shone and a gentle breeze blew through the city and a troupe of keen and curious walkers gathered in the Irish Architectural Archive’s beautifully appointed premises in Merrion Square, the first stop of the  Dublin Plays Itself walk. 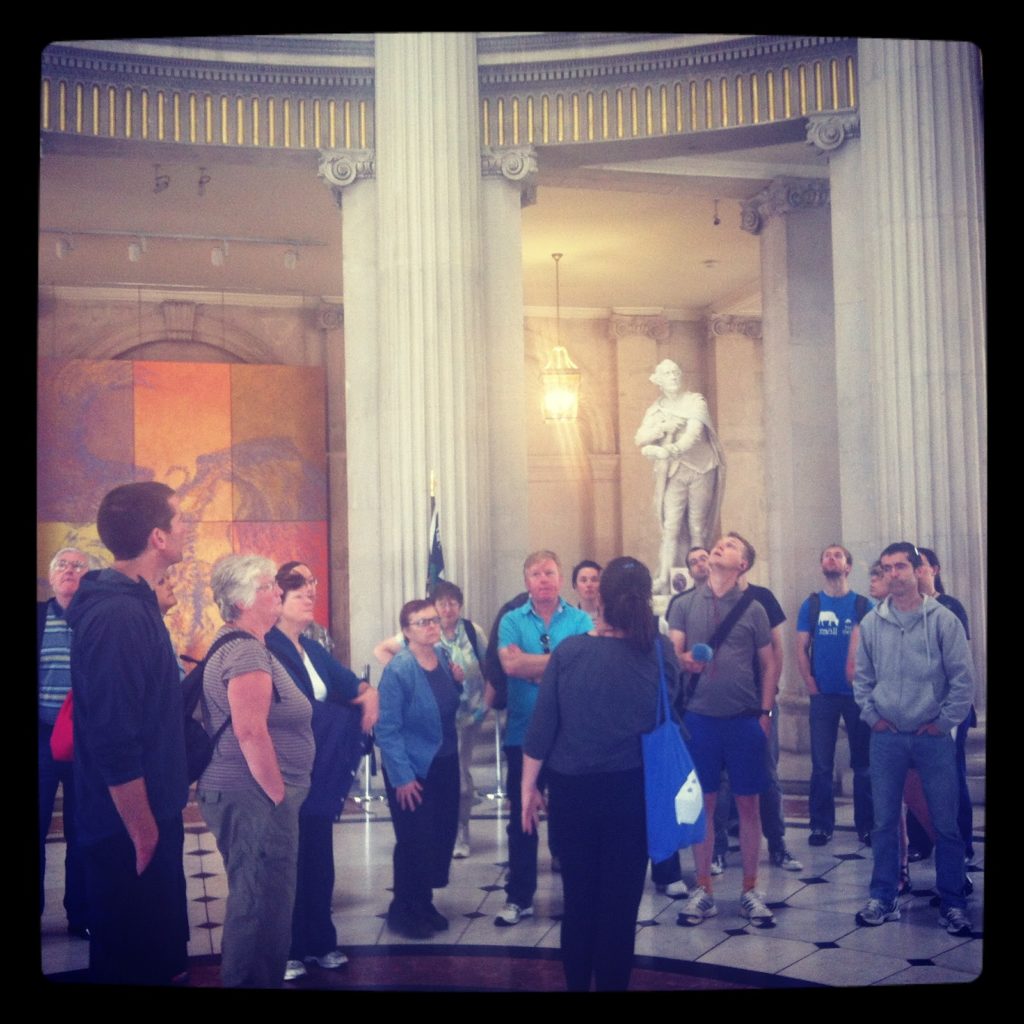 Ogling the oculus at City Hall

They were here to see Dr Ellen Rowley, Architectural Historian, and I presenting a series of films made in and about 4 distinct areas in the South city and to walk with us through those areas comparing and contrasting the full colour present day environment with the black and white version of yesteryear.

The untried and untrusted plan was at once exciting and chaotic – who would say what? When? How exactly would we connect the olden day films with the modern day streets? Would the juxtapositions of old and new be good and stark – or would they be subtle or maybe imperceptible? And if the material didn’t inspire any meaningful response would I resort to babbling about how many people wore hats in the olden days and wasn’t the traffic very light and do you remember paying into the Grafton with jam jars and isn’t it funny how you think there’s loads of pollution now but look how much dirtier the buildings were 50 years ago.

Happily, Ellen Rowley’s expertise left no room for my woolly rambling. From the start, she communicated her genuine delight at spotting moving images of lost but not forgotten monuments such as the enormous cenotaph erected in 1923 outside government building in honour of Arthur Griffith and Michael Collins demolished 1950 and the statue of King William of Orange in College Green – blown up in 1929. She drew our attention too to the changes in street surfaces and street furniture and really opened our eyes to the city as we left the IAA and walked through Merrion Square Park (now home to an al fresco archive of Dublin lamp standards)  and onwards to Trinity College. 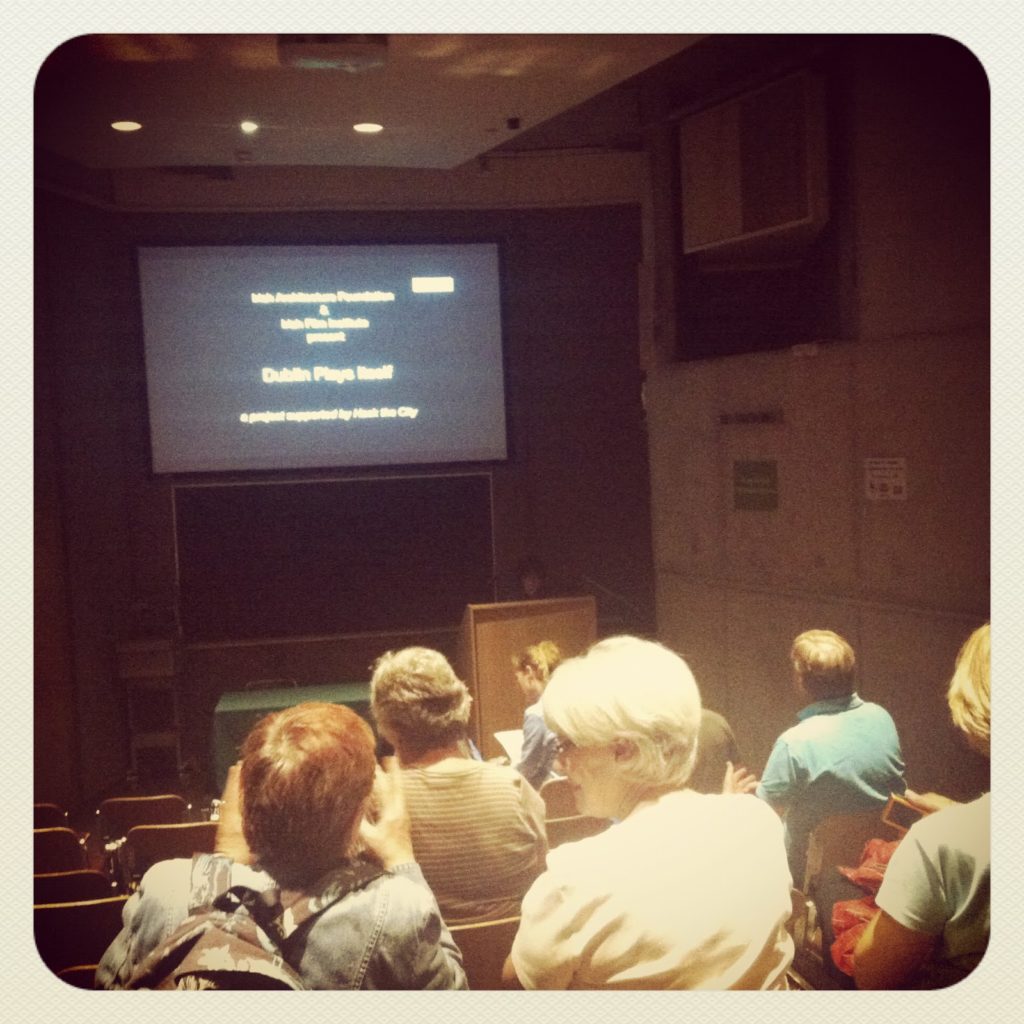 Ready to Roll in TCD

At Trinity we screened an energetic selection of feature and documentary extracts of films made in and about the college and were delighted when author Christopher Fitz-Simon piped up from the audience to say not only was he familiar with the film Building for Books (1958) but he was in it! And he kindly identified a striking young blonde student in one scene as the artist Pauline Bewick!

Next stop was City Hall – where we the film selection reflected the political resonances of the building and adjacent Dublin Castle and then Ellen talked of the building’s lofty rotunda, the audacious dome (domes heretofore were for sacred buildings).

And then on to our final stop through the heart of the Liberties to NCAD’s premises in Thomas Street where we screened the elegiac Torramh an Bhairille about the last days of the Guinness Coopers and Clubs Are Trumps (1959) about Our Lady Of Counsel Boys Club, housed in Marshallsea Barracks until shortly before they were demolished in the early ‘60s.

We finished up, tired but happy – footsore perhaps but enriched with new knowledge and with a new curiosity and pride in the city that surrounds us – a living, vibrant museum that is open to all.

We look forward to exploring  the North City next Saturday – if Ellen and I can agree on how much footage to include of men pouring concrete, about which she has a weird fetish ( the concrete, not the men pouring it), in the making of the Irish Life Mall.