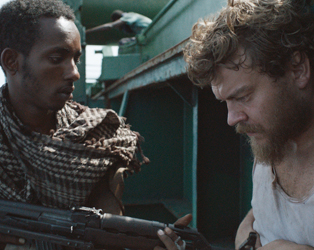 The cargo ship MV Rozen is heading for harbor when it is hijacked by Somali pirates in the Indian Ocean. Amongst the men on board are the ship’s cook Mikkel and the engineer Jan who, along with the rest of the seamen, are taken hostage in a cynical game of life and death. With the demand for a ransom of millions of dollars, a psychological drama unfolds between the CEO of the shipping company and the Somali pirates.

A Hijacking, from writer-director Tobias Lindholm who previously scripted the excellent wrong-man drama The Hunt and a political drama Borgen, is opening this Friday, May 17th, with Maritime Piracy experts and real-life hostage Chirag Bahri attending the opening night screening at 18.30. They will be interviewed by Philip Molloy.

To celebrate the release of A Hijacking, we have three box-sets of Tobias Lindholm’s Borgen to give away, courtesy of our friends at Eclipse Pictures and Arrow Films. Simply fill in the details on the entry form below before midnight Monday, May 20th, 2013. Good luck!

This competition closes at 12am on Monday May 20th, 2013. Three winners will be notified by email shortly after. (See IFI Terms and Conditions regarding prizes and competitions.)