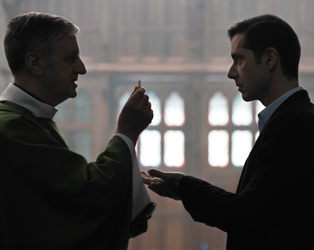 This film was released on Friday 25th October 2019 and is no longer screening.

Alexandre (Melvil Poupaud) lives in Lyon with his wife and children. One day he learns by chance that the priest who abused him when he was in Scouts is still working with children. He decides to take action and is soon joined by two other victims of the priest, François (Denis Ménochet) and Emmanuel (Swann Arlaud). They band together to ‘lift the burden of silence’ surrounding their ordeal, but the repercussions and consequences will leave no one unscathed.

Structured as a triptych, Ozon’s film begins with Alexandre, a fervent Catholic who is shocked by the church’s unwillingness to take action, before shifting perspective to focus on the crusading François and his creation of a social media campaign, which leads them to Emmanuel, a man from a less privileged background who cannot conceal his psychological scars.