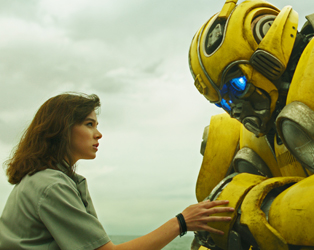 Bring the imagination of Laika animator Travis Knight to the Transformers franchise and you get this fun, girl-powered, nostalgic action-adventure. Showing the wit and artistry he brought to directorial debut Kubo and the Two Strings, Knight wins a whole new younger audience for the old toys.

Charlie (Hailee Steinfeld) is a hugely likable teen music fan, trying to get over the death of her dad by spending time tinkering with broken down cars.

That old VW beetle she takes on is, of course, an Autobot, dispatched to earth and missing home. The inevitable war with the Decepticons is given heart and character among the explosions in this affectionate and successful prequel.