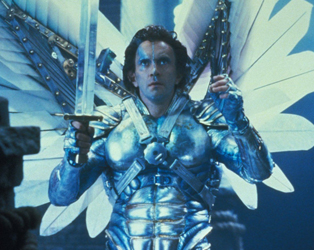 This screening will be introduced by broadcaster Rick O’Shea.

Brazil is many things: one of the great dystopian sci-fi films; a biting and nightmarish satire on bureaucracy that blends Kafka and Orwell seamlessly; a highly influential exercise in style, design, and tone; and the beginning of director Terry Gilliam’s difficulties with studios that would go on to plague his career.

In a future society operated along rigid lines and according to unfathomable bureaucracy, low-level clerk Sam Lowry (Jonathan Pryce) fantasises of breaking free from his humdrum reality into a life of heroism. When he is assigned to investigate a clerical error that led to the death of the wrong person, Sam is drawn into an ever more convoluted set of circumstances involving terrorism against the faceless state, plastic surgery disasters, and, just maybe, love. With a rich vein of dark humour and typically Gilliamesque visual flourishes, Brazil remains a highpoint of the director’s career.