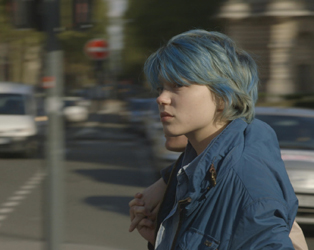 Blue Is the Warmest Colour Competition

The Palme d’Or winner at Cannes earlier this year, Blue Is the Warmest Colour, is opening today at the IFI to ★★★★★ reviews! Kechiche’s adaptation of Julie Maroh’s graphic novel emerges as a daring film that evocatively depicts the pleasures of being in love and the pain of heartbreak while acknowledging the fragile line between those two states.

To celebrate the release of Blue Is the Warmest Colour, screening as part of Carte Noire IFI  French Film Festival and continuing throughout the month at the IFI, we have limited edition t-shirts from the film and DVDs, including The White Ribbon and 4 months, 3 weeks and 2 days, to give away! All courtesy of our friends at Curzon Film World / Artificial Eye.

Which other film, screening as part of Carte Noire IFI  French Film Festival, is directed by Abdellatif Kechiche?

Blue is the Warmest Colour continues at the IFI throughout November. See our screening times & book now!

Competition closes at midnight Wednesday, November 27th, 2013. The winners will be contacted by email shortly after. (See IFI Terms and Conditions regarding prizes and competitions.)