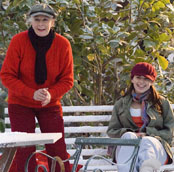 Blog: A Green White and Gold Christmas: Irish Representations of the Festive Season on Film

This December, the IFI celebrates Christmas with its Festive Favourites and IFI Family Christmas screenings including Miracle on 34th Street and The Muppet Christmas Carol.  Alternatively, escape from all of the Christmas noise and activity with the free Archive at Lunchtime screenings of Peter Carey’s tranquil landscape films. In this month’s blog from the IFI Irish Film Archive’s Tiernan MacBride Library we offer an eclectic mix of Christmas-related Irish film and television productions for your perusal.

Christmas Morning is a “wholly delightful” [1] short film which retells the story of the traditional Irish ballad Arthur McBride and the Sergeant, sung here by Paul Brady. It was directed and financed by Tiernan MacBride, son of Seán Mac Bride and grandson of Maud Gonne, who was a founding father of the Irish film industry. MacBride was a key figure in the establishment of many prominent film-related organisations including the first Irish Film Board. Our library is named after him in honour of his many years as a passionately engaged board member of the Irish Film Institute. In the film, two Irishmen out strolling on Christmas morning are threatened by a recruiting Sergeant when they refuse his offer to join the British army. They triumphantly defend themselves against the Sergeant and his companions, leaving the soldiers dazed and defeated on the beach. The film, shot over three days [2] with an all-Irish cast and crew, was selected for competition at the 1978 Cannes Film Festival. Based on a Maeve Binchy short story, How About You features actress Hayley Atwell as Ellie, a free-spirited young woman who is left to care for the cantankerous residents of a retirement home over Christmas. Bitter conflict and misunderstanding gradually change to solidarity and respect between the different generations, and this, along with moments of both humour and humanity make it a “classic old school, Christmas, feel-good movie.” [3] The film features a stellar cast including Vanessa Redgrave, Imelda Staunton and Brenda Fricker as well as a strong, dignified performance by Joan O’Hara who passed away shortly after filming ended. Director Anthony Byrne acknowledged the wealth of experience and talent of the assembled actors, joking in one interview that “When those ladies stamped their feet I listened!”[4] Vanessa Redgrave (Georgia Platts) and Hayley Atwell (Ellie Harris) in How About You.
Copyright 2007 Ferndale Films.

In this reflective Irish-language documentary interviewees recall their childhood memories of Christmas in the different counties of 1940s and 1950s Ireland. The film is interspersed with rare images and film footage from the IFI Irish Film Archive, Gael Linn and the ESB Archives, among others. For many of the interviewees it was a simpler time when money was scarce, though poitín and camaraderie were plentiful. In pre-electrified Inis Meáin, the children would walk the length of the island gazing at the candles illuminating the windows of the houses. Participants describe too the tradition of going on the wren, where soot-covered children or costumed bands of adults collected money from their neighbours, for whom they sang and danced. While some of the interviewees in the piece look back nostalgically at the freedom, religious devotion and innocence of their Christmas childhoods, others caution against lamenting the past and concentrate instead on the promise and hope that the future holds. The Mad Cows is a Keg Kartoonz-produced animation series which tells the story of an “eclectic bunch of anthropomorphic cattle” [5] who have been struck by a mysterious bolt of lightning and can now stand upright, speak and embark on adventures around Ireland. In this Christmas episode, the mad cows foil the dastardly plans of an avaricious toy store owner who is swindling his customers out of their money and his cousin out of his inheritance. Dry Irish wit abounds and the episode makes both visual and verbal references to Charles Dickens’s A Christmas Carol, often to comic effect. One example of this occurs when the seemingly repentant shop owner offers money to a passing child to buy the fattest turkey he can find for his family. The boy drops the money, looks at the shop owner in disgust and splutters, “Eww, gross, we’re VEGANS.”[6] Christmas is saved for the O’Clohessy family in The Mad Cows. Copyright 2011 Keg Kartoonz.

The Republic of Telly Christmas Episode (2013)

The Republic of Telly is a topical magazine show which satirises Irish and British television programmes and is “scornful of hypocrisy, idiocy and abuses of power.”[7] The series caused controversy in 2010 when a vox pop for the show filmed outside Leinster House sparked rumours of Mary Harney’s resignation. [8] The series was also instrumental in raising the profile of masked comedy duo Blindboy Boatclub and Mr Chrome, better known as The Rubberbandits. They feature on the show as reporters, weathermen and agony aunts, employing a brand of satire that ranges from the absurd to the shocking. The Rubberbandits Christmas was aired as part of The Republic of Telly’s Christmas episode in 2013 and in the sketch the two discuss the history behind Christmas, presenting their own version of the nativity crib which includes Russell Brand, Liam Neeson and a velociraptor. The piece ends in a typically surreal fashion, with a suggestion from Blindboy Boatclub that he may not exist at all, appearing to Mr Chrome only as “a hallucination of your super-ego.” [9]