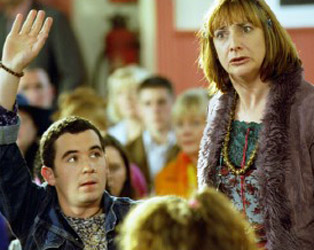 The screening was  followed by a panel discussion with Gerard Stembridge  (film director), Lucky Khambule (coordinator, Movement of Asylum Seekers in Ireland) , and Cllr Yemi Adenuga of Meath County Council. The panel was moderated by Betty Purcell  (author and broadcaster).

The community of Black Rock is divided by the news that the town is soon to become home to 30 asylum seekers. A town meeting hears the concerns of those with complaints of ‘lack of consultation’ and fear of ‘murdering rapists’ and from others who are looking forward to
‘something different – a bit of craic’.

Gerard Stembridge’s 2001 film perfectly echoes ongoing events in a small midlands town when inhabitants insisted that their objection to the arrival of 80 asylum seekers at a local hotel (twice targeted by arsonists) was motivated not by racism but by concern about inadequate infrastructure. Stembridge’s wry social satire is well-served by an assured comedic cast including Pauline McGlynn, Don Wycherly and Des Keogh.