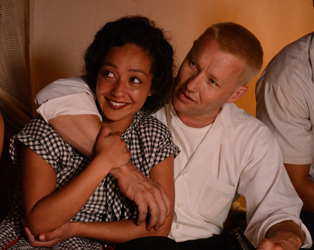 Loving is the story of Mildred and Richard Loving, a black woman and a white man who were married in 1958 and faced the crushing anti-miscegenation laws of their time. But the Lovings fought back against the system, and their bond helped to break the chain of persecution for the generations to come.

The film stars Irish actress Ruth Negga, who has earned an Oscar nomination for her role as Mildred Loving. Richard is played by Australian actor Joel Edgerton and there’s support from Marton Csoka and Nick Kroll. Hear from them, as well as writer/director Jeff Nichols in this behind the scenes featurette.

Loving is an inspiring true story about a court case that remains relevant decades on from the landmark decision, and is anchored by wonderful performances from Edgerton and especially Negga.