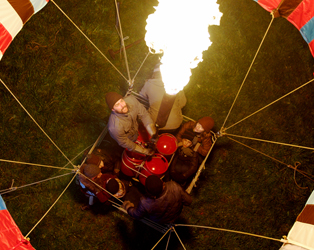 This film was released on Friday 14th June 2019 and is no longer screening.

At the height of the Cold War in 1979, bricklayer Günter Wetzel (David Kross) and his electrician friend Peter Strelzyk (Friedrich Mücke) can no longer bear the oppressive regime of East Germany and long to escape to the freedoms of the west.

Working together with their families, they embark upon a covert plan to build a homemade hot air balloon and fly undetected overnight across the border. Their first attempt is a failure, and the remains of the crash site near the German border alert the Stasi to their efforts. The two exhausted families must now start afresh and make a second balloon from scratch under immense time pressure, waiting anxiously for the right weather conditions as the Stasi investigation closes in around them.