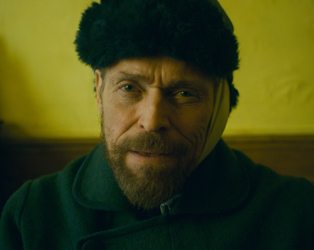 This film was released on Friday 29th March 2019 and is no longer screening.

Vincent Van Gogh’s brief period in the Provençal town of Arles in the south of France was a time of heightened creative fervor where he completed 75 paintings in 80 days, many of them renowned masterpieces.

Living in penury save for a stipend sent by his beloved brother Theo (Rupert Friend), and scorned by locals who saw him as a dangerous eccentric, Van Gogh (Willem Dafoe) began to succumb to debilitating mental trauma. His friendship with fellow painter Paul Gauguin (Oscar Isaacs), who recognised his inherent genius, provided his only connection to the art world.

Eschewing the clichés of a traditional biopic, Julian Schnabel’s (The Diving Bell and the Butterfly) imaginative, intimately conceived film recreates the artist’s process with vivid immediacy, his restless camera capturing the agony and ecstasy of Dafoe’s remarkable performance.