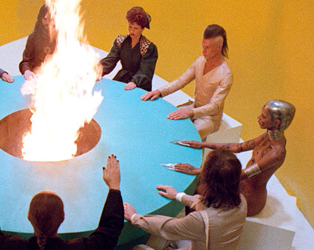 Partly financed by Yoko Ono and John Lennon who were unequivocal champions of the surrealist El Topo (1970), The Holy Mountain is arguably an even greater cinematic accomplishment for director Jodorowsky who also assumed the central role of ‘The Alchemist’ in the film, a figure who leads a small group of disparate characters through a series of transformation rituals in order to discover the secret of immortality.

A visionary spiritual quest partially based on René Daumal’s 1952 metaphysical novel ‘Mount Analogue’, Jodorowsky famously used hallucinogens on set and removed as much dialogue from the finished film as possible to allow the spellbinding, psychedelic imagery to speak for itself.

This film will be introduced by Rachael Thomas, Senior Curator: Head of Exhibitions at IMMA.

Screening as part of the As Above So Below season with the IFI and IMMA – May 6th to 31st. More info here.

Present your IFI cinema ticket from any of the IFI & IMMA: As Above, So Below season screenings at the IMMA Box Office and receive a 2 for 1 entry to the ‘As Above, So Below’ exhibition at the Irish Museum of Modern Art.