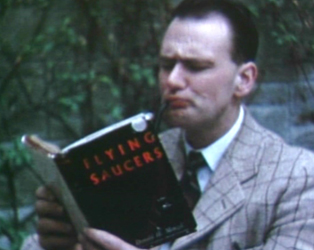 PROGRAMME ONE
THEM IN THE THING
Ufologist Desmond Leslie made this delightful science fiction film with his children on the grounds of Castle Leslie in 1954. A flying saucer arrives filled with spacemen who attempt to infiltrate the castle but are confronted by a gang of children. The cast includes well-known television astronomer and UFO sceptic, Sir Patrick Moore.
FILM INFO: 25 mins, Ireland, 1954, Digital

PROGRAMME TWO
THE ENEMY
With scenes of space missions, astronauts and dramatic war footage, this public health film demonstrates the need for boys and girls to be
ever-vigilant in the battle to prevent germs entering their bodies. Directed by Theo Hogers for the Department of Health.
FILM INFO: 18 mins, Ireland, 1976, Digital