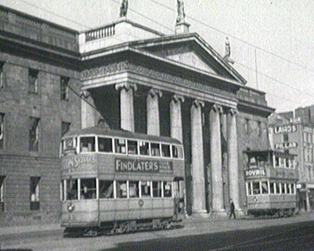 This travelogue made for US cinema audiences espouses the quality of life in rural Ireland and conveys the optimism generated by the development of the new nation.

IRELAND ON THE GO

“Ireland is a country well on its way into the future but with one foot in the past she cherishes so much”. Ireland on the Go includes footage from Bunratty Castle, the Rose of Tralee competition, the Galway Oyster Festival and Dublin.

This travelogue was designed to promote Ireland as an attractive tourist destination for English travellers: a country with “empty roads, empty beaches, no passports for English people, no language barrier”, a quiet haven without any of the pressures of modern life.