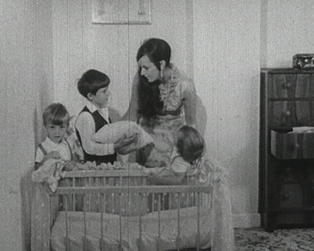 Join us for free lunchtime screenings of films from the IFI Irish Film Archive. Simply collect your tickets at the IFI Box Office. See www.ifi.ie for more information.

THE MEANING OF EGGSISTENSE
An animated film in which a man is attacked by  a swan and then gives birth to an egg.
DIRECTOR: Bruce Ryder
FILM INFO: 8 mins, 2011, Ireland

HOW WAS YOUR DAY?
A drama in which a woman (Eileen Walsh) looks forward to the birth of her first child but is devastated when she is born with physical and mental difficulties.
DIRECTOR: Damien O’Donnell
FILM INFO: 8 mins, 2011, Ireland