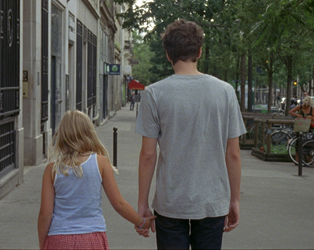 This film was released on 3rd January 2020, and is no longer screening.

David (Vincent Lacoste) is a congenial, if somewhat rudderless young man who scrapes a living managing flats in Paris, and volunteers for the city trimming trees. He also helps to look after seven-year-old Amanda (Isaure Multrier), daughter of his sister, schoolteacher and single mother Sandrine (Ophélia Kolb), and has entered into a tentative romance with Lena (Stacy Martin), a young pianist newly arrived in town. This gentle slice-of-life drama is brutally interrupted by a horrific act of terrorism, and David finds himself cast in the role of caregiver to his niece, whilst trying to make sense of the upheaval in his own life, including his relationship with his long-estranged mother (Greta Scacchi in a brief cameo). Amanda is a story of overcoming grief and pain, both for the characters and the city of Paris, in the wake of the November 2015 attacks.

Tickets for the 18.20 screening on Thursday 9th will cost €8.50 for IFI and Alliance Française members.