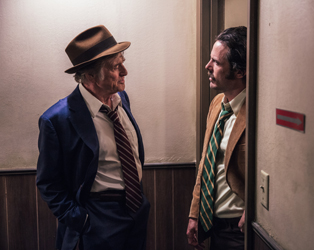 We will have accessible screenings for two highly anticipated titles in December 2018: The Old Man and the Gun starring Robert Redford and Sorry to Bother You from director Boots Riley. Read on for details.

At nearly 70 years of age, gentleman bank robber Forrest Tucker (Robert Redford) shows no sign of slowing down. Having escaped prison on numerous occasions, he continues to perform small-scale holdups with his elderly accomplices, played by the delightful Danny Glover and Tom Waits. As Detective Hunt (Casey Affleck) closes in on the so-called Over The Hill Gang, Tucker falls for a lonely widow (Sissy Spacek).

Based on a New Yorker article about the real Forrest, who died in 2004 aged 83, David Lowery’s (‘A Ghost Story’) warmly affectionate and elegiac film foregrounds character over action. If this is indeed to be Redford’s final role, his winning portrayal of an incorrigible charmer serves as a fitting swansong for a living legend.

The debut feature from musician and activist Boots Riley is one of the year’s funniest and most inventive films. A scattershot satire that hides its social commentary in plain sight, its tangents and digressions tackle issues of race, class, capitalism, identity politics, and workers’ rights in a way that would make Charlie Kaufman proud. Cash (Lakeith Stanfield) starts a new job in a call centre, quickly climbing the corporate ladder after he adopts a ‘white voice’, and ultimately coming to the attention of the company CEO (Armie Hammer), who has sinister and outlandish plans for his workforce.