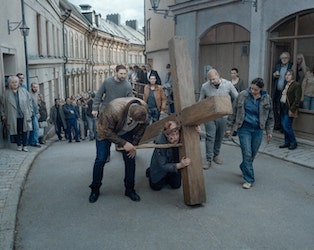 Announced by its director as being his last film, About Endlessness continues his tradition of placing characters in identifiable yet somehow liminal spaces, but this time with more of an eye to the historical as it contemplates the cycles through which humanity rises and falls. The film also differs from the ‘Living Trilogy’ that preceded it in employing humour more sparingly, lending it a different kind of depth as the viewer excavates Andersson’s intentions. In addition, the presence of a seemingly omniscient narrator shines a clearer light than usual on questions regarding the nature of spirituality and possible deities. However, this is not to say that About Endlessness marks a radical departure. The visual style and extremely careful use of language remain intact, and the film contains a number of moments that approach the sublime. While it is perhaps not the valedictory effort one might not have expected, it is a quietly beautiful and vulnerable farewell from a genuine and great auteur.