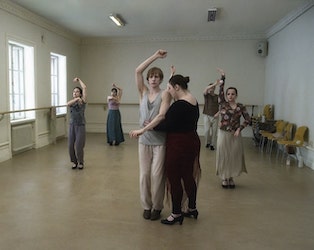 With an output of just six features in 50 years, Swedish director Roy Andersson stands alone in contemporary cinema, an artist possessed of a singular style and deep compassion. Struggling to deal with the success of his debut feature, A Swedish Love Story (1970), in which the influence of the Czech New Wave is readily apparent, five years elapsed before his sophomore effort, Giliap (1975), the critical and commercial failure of which resulted in Andersson turning his back for two decades on filmmaking in favour of a career in commercials. However, the acquisition of his own studio space in the 1980s and the measure of control this gave him over the creative process seemed to revive his interest. The appearance of a pair of remarkable shorts, Something Happened (filmed in 1987, but unreleased until 1993) and World Of Glory (1991), saw the emergence of a style that has formed the template for Andersson’s subsequent work, the films included in this season. These consist of vignettes staged in meticulous tableaux that examine the trials and tribulations of human existence while at the same time exulting in the triumphs and joys innate in our multi-faceted natures. Laced with a dry, absurdist sense of humour, Andersson’s films are unique experiences, and together form one of cinema’s most distinctive bodies of work.

Introduction and notes by Kevin Coyne