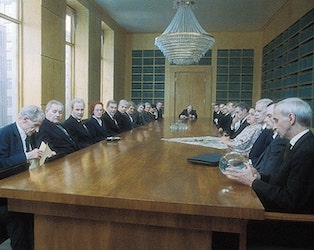 Twenty-five years after Gilliap, and taking four years to complete, Songs From The Second Floor showcased the new rigorousness of Andersson’s filmmaking style. Consisting of 46 discrete ‘episodes’, each of which is filmed in a single take using a static camera, it takes place in an anonymous city whose inhabitants are seemingly in the grip of a form of breakdown, a condition mirrored in the larger society. As the city’s arteries are clogged with a barely-moving traffic jam, a parade of stockbrokers whip each other, and a furniture salesman burns his own business to the ground. With these and other stories, Andersson takes aim at capitalism and religion, his visual inspiration coming more from fine art than cinema (Goya in particular remains one of the director’s touchstones), with a use of symbolism that rewards (and sometimes requires) repeated viewing to fully parse. As would become a signature flourish, the bleakness of his outlook is frequently leavened by moments of grace and humour.