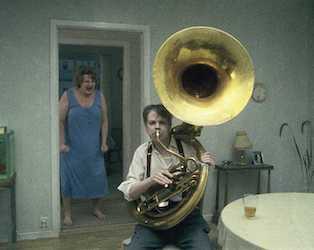 Cementing his position as cinema’s master of the bleakly humorous, Andersson’s next film, You, The Living, is again less concerned with narrative than with observing the minutiae of daily human existence, particularly those small moments which so often thwart our best intentions. Across fifty self-contained tableaux, it focuses on characters who attempt to salvage something positive from life’s many disappointments. Each character is ultimately striving for a connection with someone else, whether it is the young girl with an unrequited crush on a rock guitarist (the pleasure of music is a recurrent theme), or the biker who feels that no-one understands her. The film offered further proof that it would be far too easy, and lazily reductive, to tag Andersson simply as a stereotypical Scandinavian miserabilist. On the contrary, one aspect of his remarkably singular sensibility is the genuine wit that informs his depictions of the human condition. You, The Living has broad visual gags and bone-dry humour, but Andersson saves the best for last as he pulls off one of the most darkly comic endings since Dr. Strangelove in a film for which the overused adjective ‘painterly’ is entirely apt. Andersson’s affection for his characters shines through every meticulously rendered frame, and the film develops into a quiet celebration of the vagaries and uniqueness of human beings. ‘Living is complicated for each one of us,’ Andersson has said, ‘and humour saves us.’