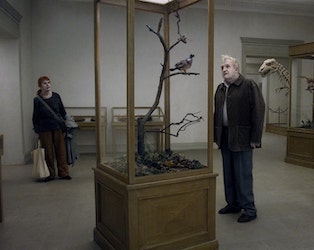 With this film, the inestimable Roy Andersson presented what he calls “the final part of a trilogy about what it means to be a human being”. As with the earlier films, A Pigeon Sat On A Branch Reflecting On Existence consists of meticulously composed tableaux in which a large cast of characters endure life’s travails, shot through with an absolutely bone-dry sense of humour and of the absurd that finds hilarity in the mundane, making for a unique style of comedy. However, Andersson’s real genius is in creating profound resonance with the lightest of touches – the context given to the familiar, mechanical recitation “you have no messages” produces a heart-breaking depiction of loneliness, while a wordless sequence close to the end is a remarkable articulation of rage at the legacy of colonialism that harks back to the opening of World Of Glory. Of note too is Andersson’s intriguing use of language, in which worlds are drawn with an almost Beckettian asceticism.