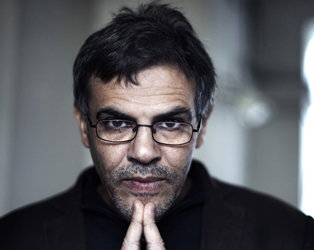 Director, screenwriter and actor Abdellatif Kechiche was born in Tunisia in 1960. At the age of six he moved to France, thereafter studying drama at the Antibes Conservatoire of Music and Drama.

He made his directorial debut with Blame it on Voltaire (2000), followed in 2003 by Games of Love and Chance which won César awards for Best Film, Best Screenplay and Best Director. Further multiple awards for Couscous (2007) and Black Venus (2010) followed, and this year Blue is the Warmest Colour was awarded the prestigious Palme d’Or at the Cannes Film Festival.

Despite their long duration, there is nothing of Kechiche’s films that seems superfluous. Through tight framing and intimate close-ups he observes without judgement. Much of Kechiche’s fascination lies in protracted conversations, often with overlapping dialogue – at once free flowing and naturalistic yet precisely shaped, embroidered with multiple story strands – yet never losing focus. Through these he extracts astoundingly raw and emotional performances from his actors.

In filming his characters over such long sequences, a powerful sense of realism emerges. Kechiche digs in – the steadfast eye of the camera eliciting intense empathy from the viewer. (MPR)

This season coincides with the release of Abdellatif Kechiche’s latest work and fifth film Blue is the Warmest Colour (winner Palme d’Or, Cannes 2013). The season, details of which can be also found in the IFI November Programme, features all of Abdellatif Kechiche’s films: Blame it on Voltaire (2000), Games of Love and Chance (2003), Couscous (2007) and Black Venus (2010).

The IFI would like to thank L’Institut français; Christine Houard.