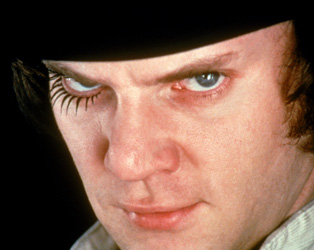 This film was released on Friday 5th April 2019 and is no longer screening.

Stanley Kubrick’s adaptation of Anthony Burgess’s novel has had a famously difficult history in Ireland. Although banned from release in 1973, it was in any case almost immediately withdrawn from circulation in this territory at the request of its director after a media outcry in which it was claimed that a number of contemporaneous violent crimes were supposedly inspired by the film’s content.

Following Kubrick’s death in 1999, it was finally presented in its uncut form to Irish audiences in 2000, and this new, digitally restored version represents the film’s first full return to cinemas since. A Clockwork Orange follows the exploits of Alex (Malcolm McDowell at his most sinister and charismatic) and his cronies as they indulge their pleasures through violence. Imprisoned for murder, Alex voluntarily undergoes an experimental new therapy designed to cure him of his anti-social urges.