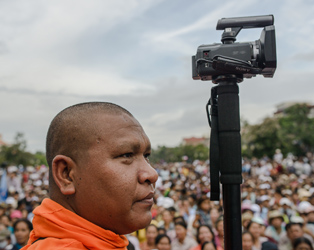 This screening will include a Q&A with director Chris Kelly and Venerable Luon Sovath, hosted by RTE Foreign Editor Eimear Lowe.

An intimate portrait of three people caught up in the chaotic and often violent developments shaping modern-day Cambodia.

Shot by Irish director Chris Kelly over six years, the film charts the gradual politicisation of two young mothers and one Buddhist monk, the growing wave of land-rights protests that led to the ‘Cambodian Spring’, and the tragic events that followed. Winner at Toronto Hot Docs for best international feature, the film is about the complexities, both political and personal, of fighting for what you believe in.

With the support of Front Line Defenders.