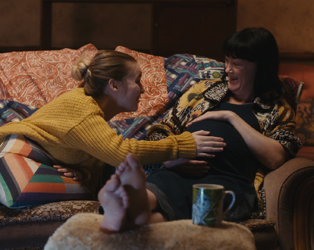 After a one-night-stand with a younger man on her 44th birthday, party-loving single mother Pamela (played effortlessly by Bronagh Gallagher) makes the shocking discovery that she is pregnant. Meanwhile her disapproving, strait-laced daughter Allegra (Lola Petticrew), who sees herself as the adult of the pair, is struggling to navigate the pitfalls of being a teenager, made harder by the fact that her mother has a much more active social life than she does.

Rocked by this unexpected pregnancy, both Pamela and Allegra are forced to grow and adapt to their new reality, while they deal with the judgement and small mindedness of others around them. A Bump Along the Way is a tender and warm-hearted feature debut from director Shelly Love.