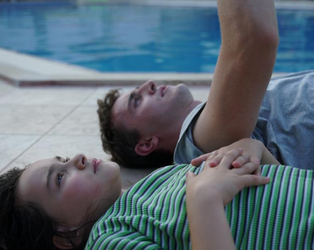 This week’s new titles at the Irish Film Institute from Friday, 18th November 2022 include Aftersun, and Aisha. Read on for a selection of reviews or pop in to make up your own mind!

“Five stars for Paul Mescal’s new film. This is one for the ages.” 5/5 – The Irish Times

“Beach holiday with Paul Mescal and daughter is a sunny delight.” 5/5 – The Guardian

“An astounding first feature that captures Paul Mescal at his most heart-wrenching.” 5/5 – Independent UK

“This mesmeric debut will make you want to stay suspended in its sun-baked setting with its two captivating lead characters for far longer than the runtime. A triumph of new British filmmaking.” 5/5 – Empire

“The dynamic between Corio and Mescal is nothing short of amazing.” 4/5 – Roger Ebert

“A masterful, nostalgic debut from Charlotte Wells.” – The Financial Times

“A tender, slow-burning drama of rare quality and depth” – The Independent

“Aftersun ends and you want more. You fall in love with two people who, only 90 minutes before, were total strangers.” – Rolling Stone

“An understated but powerful indictment of direct provision.” 4/5 – Entertainment.ie

“Aisha is a story about finding a home when there is nowhere else to run to, the kindness of strangers, and the simplicity of having someone there despite the circumstances of life.” 4/5 – The Upcoming