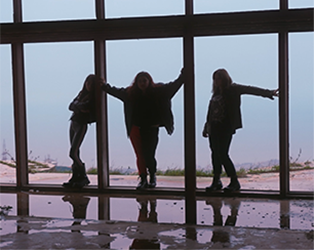 August 24th 2022: The Irish Film Institute (IFI) is delighted to announce the programme for the IFI Documentary Festival 2022. This year, the festival will take place both at the IFI in Temple Bar and online, nationwide on IFI@Home, September 21st – 25th. Tickets for cinema screenings are now available from www.ifi.ie, with online rentals available to pre-order from www.ifihome.ie.

Intimate portraits, stories of remarkable human connections, kindness and empathy, a rare look behind the music and tales that are truly stranger than fiction await.

On announcing the programme, IFI Director Ross Keane said ‘The IFI Documentary Festival is always a firm favourite amongst our audiences and is a in the cultural calendar each Autumn. This year’s programme features an eclectic mix of fascinating stories from Ireland and around the globe, shining a spotlight on stories, both personal and societal, that are sure to engage, enlighten and entertain a broad range of audiences.’

This will be the first IFI Documentary Festival in three years to welcome audiences back into the Eustace Street cinemas at full capacity, but the decision was made to maintain an online element to the festival in response to the large numbers from outside Dublin who are engaging with IFI@Home. The festival is programmed IFI Irish Film Programming team Sunniva O’Flynn (Irish features) and Dean Kavanagh (Irish shorts) and IFI Head of Programming David O’Mahony (international titles); this year discover:

Stills can be downloaded here.

The programme in more detail:

The IFI Documentary Festival will open on Wed 21 September with the Irish premiere of ALL THESE SONS, directed by Joshua Altman, Bing Liu.

Followed by a wine reception in the IFI Foyer.

David has been given months to live but ‘improves’ when Simon arrives and they embark on a five-year odyssey from the squalor of David’s rubbish-filled flat. Simon tries to curb David’s urge to give all his money away to his handsome Brazilian carer and friendly but self-interested neighbours. Despite the house burning down, homelessness, cancer, and the dreaded ‘care home’, Simon helps David to create an exuberant final performance to send him on his way. Though at times painfully intimate, Chambers’ film ultimately celebrates a joyous spirit which transcends the indignities of old age.

This screening will be followed by a Q&A with director Simon Chambers.

The screening will be followed by a Q&A with director Simon Lereng Wilmont.

The screening will be introduced by producer Tom Burke

IFI Documentary Festival is supported by RTÉ Supporting the Arts.