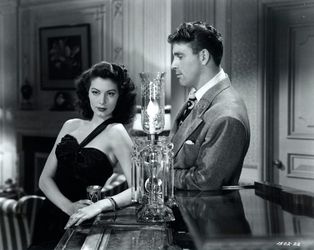 PRE-CODE CLASSICS AND WHEN EUROPE MADE HOLLYWOOD

July 11th 2022: This August, the Irish Film Institute (IFI) presents two seasons of classic cinema, exhibited in collaboration with the Watershed Cinema Rediscovered on Tour programme, with thanks to Park Circus and Warner Bros. Pre-Code Hollywood: Rules are Made to Be Broken screens August 1st to 8th, and When Europe Made Hollywood screens August 10th to 22nd.

Screening as part of the Pre-Code Hollywood season are films starring the witty and wild James Cagney, Clark Gable, William Powell, John Wayne, Jean Harlow and Barbara Stanwyck amongst others, released before the restrictive censorship of the Hays Code (1934 – 1968).

Jewel Robbery (1932), screening on Sunday 6th, stars William Powell and Kay Francis in a comedy-mystery involving a love affair and a jewel thief. Rounding off the Pre-Code season is the legendary Baby Face (1933), starring Barbara Stanwyck as Lily Powers.

Included in the When Europe Made Hollywood season are a number of titles that showcase the European influences that shaped Hollywood entertainment with a side of escapism, including silent drama Sunrise: A Song of Two Humans (1927), directed by German director-producer-screenwriter F.W. Murnau. Winner of the Academy Award for Unique and Artistic Picture at the first Academy Awards in 1929, Sunrise screens on Wednesday 10th.

From the 1930s, Shanghai Express (1932), made by Austrian-American director Josef von Sternberg and starring Marlene Dietrich – the fourth of seven films that Sternberg and Dietrich created together – screens on Saturday 13th. Lee Garmes won the Best Cinematography Academy Award for his work on the film at the 5th Academy Awards. Queen Christina (1933), starring Greta Garbo and John Gilbert in their fourth and final film together, screens on Sunday 14th.

Master of darkness Fritz Lang’s Fury (1936) screens at the IFI on Monday 15th, telling the story of an innocent man (Spencer Tracy) who narrowly escapes from a lynch mob and then seeks righteous revenge.

From the 1940s, Billy Wilder’s ingenious Double Indemnity (1944), featuring a stunning score by Miklós Rózsa, screens on Wednesday 17th, and the legendary Casablanca (1942) from Hungarian-American director Michael Curtis screens on Saturday 20th. The Killers (1946), based in part on the 1927 short story by Ernest Hemingway and starring Ava Gardner and Burt Lancaster, screens on Sunday 21st.

High Noon (1952) portrays Gary Cooper as the sought-after Marshal Will Kane, and Grace Kelly as pacifist Amy Fowler Kane, and screens on Monday 22nd. Nominated for seven Academy Awards and winner of four, the screenplay was written by later-blacklisted Carl Foreman. A Dimitri Tiomkin score complements excellent vision by producer Stanley Kramer and director Fred Zinnemann, who would later go on to direct Oklahoma! (1955) and A Man for All Seasons (1966).

Tickets for both seasons are on sale now, with multi-film season passes available.

Tickets are on sale now from www.ifi.ie/when-europe-made-hollywood/