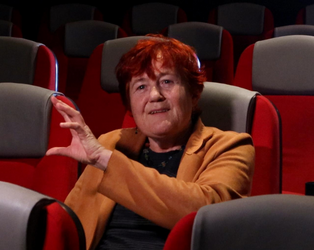 May 19th 2022: The Irish Film Institute’s second IFI Filmmaker Playlist has been curated by filmmaker and visual artist Trish McAdam. The playlist is free to view worldwide at www.ifiarchiveplayer.ie and via the IFI Archive Player suite of Apps, developed by Irish tech company Axonista.

Since the production of her early shorts in the 1980s, Trish McAdam has created a vibrant body of work, embracing a range of forms and subjects and retaining a singular voice. McAdam recently visited the Irish Film Institute to select an array of materials from the IFI Archive Player, originally preserved in the IFI Irish Film Archive. The films chosen span three key areas: early representations of Ireland on film (1910s – 1920s); changing culture in Ireland (1950s – 1970s); and contemporary Irish filmmaking (1980s – 2000s). Speaking about the Collections on the IFI Archive Player, McAdam described the materials as, ‘not so much a tip of an iceberg, as a scattering within the iceberg.’

Trish McAdam has directed films including Snakes and Ladders (1997), her debut feature; Hoodwinked (1998); Irish Women Since the 1920s; and documentary profiles of Leo O’Kelly, Donal O’Kelly and Liu Xiabo. She has recently explored new modes of storytelling in her formally exciting short films Strangers to Kindness (2015) and Confinement (2019).

Each film in her Filmmaker Playlist is preceded by a short introduction, and the full list of films includes Wonderful Western Islanders, depicting the lives of the inhabitants of Aran Islands in 1924, made about ten years before Flaherty’s Man of Aran; Housing Discrimination, shot in 1953, highlighting housing discrimination in Fintona, County Tyrone; and Alison Kelly’s Statistic, a film about an unplanned pregnancy made in 1983, the year which saw the passing of the Eighth Amendment. McAdam’s selection also includes the Cathal Black virtual exhibition, showcasing materials from the Paper Collection held in the IFI Irish Film Archive including film stills, posters, programme notes, production notes and letters.

The filmmaker playlist is available to view here: www.ifiarchiveplayer.ie/filmmaker-playlist-2022.

This IFI Archive Player Filmmaker Playlist joins a wealth of other materials preserved in the IFI Irish Film Archive, which holds over 30,000 cans of film dating from 1897. Other collections currently available free-to-view worldwide include The Irish Adverts Project, featuring restored ads from the 1960s, 1970s and 1980s; The Irish Independence Film Collection, a treasure trove of repatriated newsreel material from British Pathé, exploring a tumultuous time in Ireland’s history; and F-Rated: Short Films by Irish Women, presenting stories told through the prism of the female gaze.