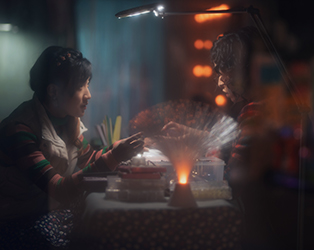 Commenting on this year’s in-cinema and online programme, the festival’s Artistic and Programming Director Marie-Pierre Richard said, ‘Another year of the festival, and another year of wonderful support from the Arts Council and the Irish Film Institute. This year, we are thrilled to have had the opportunity to invite Chris Berry, Department of Film Studies at King’s College London, and film producer in Taipei, Chuti Chang, both who have been invaluable advisers to the festival, to curate two new features for the programme. Despite all the madness in the world, it’s wonderful to see the vitality and diversity of East Asian cinema with so many insightful and universal stories of human endeavour and strength and this year, we are also thrilled to be able to tour films from the programme in venues in Galway, Cork and Limerick. Enjoy!’

The festival opens with Hong Sangsoo’s witty In Front of Your Face, in which protagonist Sangok, played by Lee Hye-young, adjusts to life back in Seoul after living in the US. This pared-back character study of a middle-aged former actress is full of light and simplicity, alongside the gravity of everyday conversation. Screening on Friday 1st, Longman Leung’s new biopic Anita follows Hong Kong Cantopop icon Anita Mui, from her early rise to stardom to her death from cervical cancer at aged 40; Anita was the closing film at the Busan International Film Festival 2021 and has been a Box Office hit in Hong Kong across 2021.

In classics, Pale Flower screens on Saturday 2nd in stunning 4K, freshly restored from the original 35mm negative by the Shochiku Company, in cooperation with the Japan Foundation. Masahiro Shinoda’s classic film noir forms part of the Japanese New Wave cinema of the 1960s, and takes inspiration from yakuza gangster thrillers. Shot on immaculate black and white CinemaScope, and with a jazz score by composer Toru Takemitsu, this 1964 gem is visually and narratively thrilling.

Also screening on Saturday 2nd are White Building, Cambodian director Kavich Neang’s film draws on his personal history to talk about the capital city of Phnom Penh, addressing intergenerational, spiritual, local and global tensions, and Ripples of Life, Wei Shujun’s second feature which follows a film crew on location in the remote town of Yong’an in southern China, showing us three chapters of filmmaking, satire, and the thrill of a local restaurant owner standing in as the movie star. Dear Tenant follows piano teacher and gay man Jian-Yi Lian (Best Actor, Taipei Golden Horse Awards, 2020), who is the tenant of a rooftop apartment owned by elderly Mrs Chou, who is suffering from late-stage diabetes. Both White Building and Dear Tenant are available to rent online on IFI@Home for the duration of the festival.

Screening on Sunday 3rd and online throughout the festival are I Was A Simple Man, which premiered at this year’s Sundance Film Festival and tells the story of Masao (Steve Iwamoto), an elderly man of Japanese descent who lives alone in Hawaii, and closing film The Real Thing, Kōji Fukada’s (A Girl Missing, EAFFI Selection 2020) 232-minute drama about a chance encounter between a young businessman and a woman in distress. Jet Lag, the new film from Zheng Lu Xinyuan (The Cloud In Her Room, EAFFI selection 2021) also screens in-cinema on the 3rd. Shot in the middle of lockdown, Xinyuan captures family stories with imagery of travel and displacement in a black and white video essay.

The festival will also feature a number of directors’ Q&As available to watch on eaffi.ie and IFI@Home as bonus content.

For more information and images contact Casey Hynes at the IFI Press Office at chynes@irishfilm.ie, and Marie-Pierre Richard at EAFFI at mprichard@eaffi.ie.

The East Asia Film Festival Ireland would like to thank the Arts Council, RTÉ Supporting the Arts, Screen Ireland, the Irish Film Institute, and all its sponsors and partners for their invaluable support.