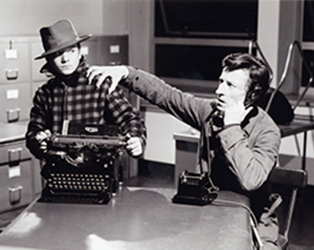 THE IRISH FILM INSTITUTE UNVEILS ITS EXCITING HYBRID PLANS FOR 2022

March 10th 2022: The Irish Film Institute (IFI) has today announced its ambitious plans for 2022 across its core activities of exhibition, preservation and education. This year, the Institute’s 30th in its iconic Temple Bar venue, the Home of Film in Ireland will present an exciting slate of theatrical and online events, strands, seasons and festivals, celebrating the shared experience of cinema, and the expansive opportunities of online. The year will include retrospectives featuring the work of François Truffaut, Katharine Hepburn and Bob Fosse, online-exclusive seasons, the return of IFI’s flagship festivals, plus the IFI Open Day. The IFI’s wide-ranging education and preservation activity will also continue throughout the year, showcasing the work of the IFI both across the country and further afield.

Following a difficult period of closures and capacity restrictions, which in turn have seen the innovative development of the Institute’s digital platforms, the IFI looks forward to a busy schedule of events in 2022. Highlights of this year’s theatrical exhibition programme include a retrospective of the French New Wave auteur François Truffaut, director of The 400 Blows and Jules et Jim; a season of films featuring four-time Oscar-winner Katharine Hepburn; a programme of the works of director Bob Fosse, whose eight-time Oscar-winning musical Cabaret celebrates its 50th anniversary this year; and a retrospective centring on Dorothy Arzner (1987-1979), the only female director in Hollywood in the 1930s.

Select programmes will be presented in a hybridised format, with some exclusive online seasons on IFI@Home, the IFI’s video-on-demand platform. In tandem with the Katharine Hepburn season in April, a selection of screwball comedies from the 1930s to the present day will be presented online, while a female focus IFI@Home season will complement the Arzner in-cinema programme. Choice seasons, such as the Truffaut retrospective, will be fully blended, with titles from the auteur available to rent online throughout May.

Speaking on the extensive hybrid programme announcement, IFI Director Ross Keane, said ‘Following two years of great uncertainty, we are delighted to be announcing such a packed schedule of activities and initiatives right across our three core areas of film exhibition, preservation and education. The 2022 programme sees the return of many IFI favourites and festivals, alongside the introduction of some exciting new plans, all reflecting the changes experienced in the film and cultural sectors, particularly in relation to the emergence of new IFI streaming platforms which now bring IFI programmes to a nationwide audience in the comfort of their own homes.‘

Chair of the Board John McGrane added, ‘We are immensely proud of our plans for 2022. Throughout the pandemic, the IFI has transformed the way in which it engages with audiences, and this ambitious new programme aims to provide people all over Ireland, of all ages and backgrounds, with unparalleled access to a broad range of film culture.‘

Irish filmmakers and their work form an integral part of the IFI’s 2022 programme, with the continuation of the Brief Encounters strand of short Irish films, the return of IFI Spotlight, a day of interrogating the output of Irish and international film and television against relevant diversity and gender benchmarks, and Dublin Plays Itself, a series of walking tours and location-led film screenings informing conversation around architecture and literary history. A ‘Best of Irish’ selection of the year’s strongest-performing new Irish releases will screen across December.

IFI Open Day will return this September after a five-year hiatus for another exciting day of free screenings and behind-the-scenes tours, opening the doors of the IFI to the public to celebrate 30 years in Eustace Street.

The IFI’s flagship festivals will all return, with the IFI Family Festival in August, the IFI Documentary Festival in September, IFI Horrorthon over the October Bank Holiday weekend, and Ireland’s largest French cultural event, the IFI French Film Festival, in November. The Kinopolis Polish Film Festival will also return in December. Existing and new partnerships will form wide-ranging cultural programmes, with the East Asia Film Festival screening from the end of March, and a collaboration with the Dublin Smartphone Film Festival in April.

Monthly audience favourites return with Wild Strawberries screenings for audiences aged 55 and up, and Irish films From the Vaults, the IFI’s monthly strand showcasing key features or programmes from the IFI Irish Film Archive.

The IFI’s flagship digital platform, the IFI Archive Player, home to the IFI’s virtual viewing room for collections from the IFI Irish Film Archive, will see the launch of a number of new collections across the year, including the Oscar® Collection, the Guinness Film Club collection, and an addition to the Archive Player Filmmaker Playlist. The IFI Irish Film Archive will continue to work across preservation projects including the Guinness Adverts Project, Reel Borders films, Women in Focus, and the films of Benjamin T Gault.

Following the success of IFI Education‘s collaboration with the Virgin Media Dublin International Film Festival in March for the third annual Careers in Screen Day, the year-long Careers in Screen programme will continue on the IFI Careers Space. The annual Schools Programme will launch in September, presenting a fully hybrid schools programme once again, bringing film education opportunities to young people right across the country. IFI Education will once again select a panel to be part of the European Film Academy Young Audience Award in November. The IFI’s commitment to critical engagement, film discourse and lifelong learning continues with the IFI Talks series, posting the question, ‘What kind of city do we want?’; discussions will cover biodiversity, diversity, a safer city, and culture and the night economy.

The IFI will continue its commitment to make its exhibition programme as accessible as possible, through Open Captioned and Audio Described screenings in-cinema, and Closed Captioned screenings online on IFI@Home.