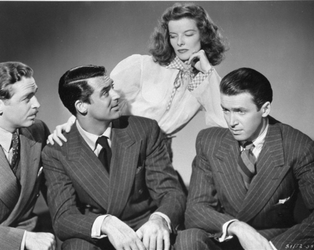 March 15th 2022: The IFI is proud to present two seasons of works from the 1930s onward, showcasing satire, slapstick and sentiment. Retrospective season Katharine Hepburn: Woman of the Year screens in-cinema only, presenting a range of Hepburn’s performances, from beloved screwball comedy Bringing Up Baby (1938) to On Golden Pond (1981), which earned Hepburn her fourth Best Actress Academy Award. Online on IFI@Home, Seventy Years of Screwballs will bring comedies from 1936 to 2020 to audiences across the country.

Commenting on the presentation of the Hepburn retrospective in parallel with a season of screwball comedies, Cinema Programmer Kevin Coyne said, ‘Katharine Hepburn is rightly revered as an actress of remarkable versatility, who could move an audience to tears with the same ease as moving them to laughter. This season celebrates her abilities, and our online season reflects her legacy in the enduring popularity of the screwball style of comedy.‘

Film, television and stage star Katharine Hepburn, known for her intelligence, determination and wit, is celebrated across the in-cinema season, where Oscar-winning performances can be seen in The Philadelphia Story (1940), Woman of the Year (1942) and On Golden Pond (1981). Hepburn stars opposite Cary Grant in Bringing Up Baby (1938), where she falls in love with Grant’s character and sets out to sabotage his impending wedding, and opposite Humphrey Bogart in The African Queen (1951), where Hepburn plays a prim Christian missionary thrown together with a grumpy riverboat captain.

Running parallel to the in-cinema Hepburn retrospective, Seventy Years of Screwballs online on IFI@Home (www.ifihome.ie) presents a range of comedies from My Man Godfrey (1936) to Blithe Spirit (2020). Upon the imposition of the Hays code in the 1930s, screenwriters were forced to experiment with how they presented more risqué elements of characters’ relationships on-screen. In the screwball comedy, fast-paced verbal sparring and witty banter between the leads was indicative of sexual tension. The structure of the screwball comedy has informed the romantic comedy genre for decades since their heyday, and has become a timeless part of cinema’s DNA.

The season includes The Devil and Miss Jones (1941), Sam Wood’s comedy about John P. Merrick, the world’s richest man who is annoyed to hear of his workers trying to form a union, and Being John Malkovich (1999), directed by Spike Jonze and written by Charlie Kaufman, as well as the iconic The First Wives Club (1996), starring Goldie Hawn, Bette Midler, Diane Keaton and Maggie Smith.