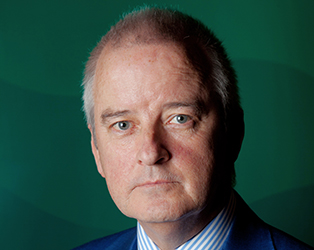 December 15th 2021: The Irish Film Institute (IFI) is pleased to announce the appointment of John McGrane as incoming Chair of the Board. As Director General of The British Irish Chamber of Commerce, an organisation which he co-founded in 2011 to represent businesses with interests in the two islands and their economies, the IFI is delighted to welcome his leadership, and the wealth of experience he brings from a financial services background.

On his appointment as Chair, John McGrane said, ‘The Irish Film Institute is one of Ireland’s most important arts and cultural institutions and I am honoured to be invited by its Board of Directors to become its next Chairperson. Through its excellent executive team led by Ross Keane, the IFI delivers its unique mission to exhibit, to preserve and to educate everyone everywhere about Ireland’s outstanding contribution to film culture and its betterment of all our lives. Following on from the outstanding leadership of outgoing Chairperson, Professor Margaret Kelleher, I sincerely thank Margaret and I am greatly looking forward to the next chapter in the Institute’s growth for the benefit of all its clients and stakeholders.‘

Outgoing Chair Professor Margaret Kelleher commented, ‘I warmly welcome the appointment of John McGrane as incoming chair of the Irish Film Institute, this uniquely valuable cultural institution. As I finish my own term as Chair, I do so with the deepest esteem and pride in the IFI. I would like to salute the IFI staff, Executive and Board who ensure that the Institute continues to grow and expand in its work across film exhibition, film preservation and film education, and who have, during a period of great challenge, enabled new modes of access to film for artists and audiences. Their work and creative vision has been an inspiration over the past nine years.’

IFI Director and CEO Ross Keane said, ‘The IFI is delighted to be welcoming someone of such high calibre as John McGrane as the new Chair of the IFI. Having successfully navigated our way through the challenging period due to Covid, which has seen the Institute transform the way in which it does business and reaches audiences, the forthcoming period promises to be exceptionally exciting, and I look forward to working closely with John McGrane as we lead the IFI into its next chapter. I would like to personally thank Professor Margaret Kelleher for her outstanding contribution and support over the last nine years, and look forward to continuing to work with her in her capacity as an IFI Council Member.’

Having joined the IFI Board in June 2020, John McGrane is a retired financial services professional, having completed a 40-year career with the Royal Bank of Scotland / Ulster Bank Group in Ireland. His career has spanned substantial initiatives in the enterprise and corporate sectors, in relation to both indigenous and foreign direct investment. He is Founder of NSI Technology, a tech start-up which helps Not For Profits become Not For Losses. He is a Board Director at Dublin Chamber of Commerce and at The British Irish Chamber of Commerce, and a number of charities. He retains active roles in the cultural, tourism and trade development sectors, having served on a number of related Boards and Government task forces.

Margaret Kelleher, Professor of Anglo-Irish Literature and Drama at University College Dublin, will leave the role in early 2022 having completed nine years on the Board, eight of which in her role as Chair. Her term as Chair saw the Institute through major refurbishments and capital projects including new archival vaults at Maynooth University, and a period of immense digital transformation. The IFI would like to express warm appreciation to Professor Kelleher for her outstanding contributions. John McGrane will officially step into the role in February 2022.