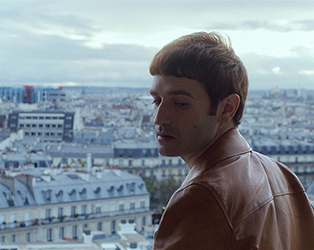 October 13th 2021: The programme for the 22nd IFI French Film Festival, the first blended in-cinema and online edition, has been announced. Ireland’s largest French cultural event will run for twelve days at the IFI and online on IFI@Home from Wednesday 17th to Sunday 28th November. The festival opens with Madeleine Collins, and director Antoine Barraud will visit the festival to take part in a Q&A following this Irish premiere screening. The programme includes 28 features, and closes with Bruno Podalydès’s French Tech. Tickets are now on sale from www.ifi.ie/frenchfest and www.ifihome.ie.

Commenting on this year’s impressive programme, IFI Director/ CEO Ross Keane said, ‘The IFI is delighted to present an in-cinema and online edition of our flagship festival, opening up new opportunities to present the best of French culture to audiences at the IFI and across the country. We are immensely grateful for the support of our patrons and funders, in delivering the highest quality blended festival possible, as culture emerges from what has been a difficult period.’

The festival opens on Wednesday, November 17th with a Gala Screening of the psychological thriller Madeleine Collins starring Virginie Efira, who plays a woman living two lives, with two separate families, across Switzerland and France. The festival is delighted to welcome the director of this opening film Antoine Barraud (The Sinkholes, 2012; The Portrait of the Artist, 2014) to the screening on Sunday 21st.

Speaking about this year’s edition of the festival, Festival Director Marie-Pierre Richard commented, ‘The pandemic has been a huge challenge for all of us, and cinema of course is not immune. Both our experience of cinema, and its production and availability, have been dramatically altered over the past two years. This year, though, is an exceptionally vibrant and dynamic year for French cinema as filmmakers have adapted to their new circumstances. We are very excited to present to you for the first time a blended edition of the festival, with both in-cinema and online screenings throughout, with a programme of 28 features here for you to discover, and what a rich selection of themes, genres and energy, and visions we have for you! Uniting all of this is the spectacular, fluid, and sophisticated cinematic visual language of so many great filmmakers.’

The French Ambassador to Ireland, His Excellency Mr Vincent Guérend, added, ‘The IFI French Film Festival is the biggest celebration of French cinema in Ireland and we are very proud to support this 22nd edition. The Festival is growing every year reflecting the strong cultural relations between our two countries. Now with its blended programming it reaches even further to audiences across the whole country. I invite you all to participate and experience the diversity of French-language cinema through this year’s wonderful film selection. Bon Festival et vive le cinéma!’

This year’s hybrid in-cinema and online programme breaks boundaries, and presents films that cross borders, including Rachel Lang’s Our Men, starring Louis Garrel and Camille Cottin and set in a military camp in Corsica; the Armenian drama Should the Wind Drop, set in an airport in the Caucasus; and documentary The Last Shelter about West African migrants in a camp at the southern edge of the Sahara. This year’s IFI Family screening is Mica, directed by Ismaël Ferroukhi, presenting the story a boy from the slums in Meknes, who gets taken on as an apprentice in a tennis club.

Subversive films on class and French society include Between Two Worlds, starring Juliette Binoche, based on French journalist Florence Aubenas’s book Le Quai de Ouistreham, written on Aubenas’s experiences in port city Caen. Jean-Gabriel Périot’s Returning to Reims, narrated by Adèle Haenel, reflects on the stories of the French working class, from the 1950s to the present day, using clips from films, documentaries and news reports over the years.

Documentaries screening as part of this year’s festival include the stunning Jane by Charlotte, examining the mother-daughter relationship between Charlotte Gainsboroug and Jane Birkin. A documentary about the future of humanity, Jean-Stéphane Bron’s The Brain tells the story of a father and son working in a lab examining AI technologies, respectively excited by and fearing the consequences of the advancement of their projects.

Exciting thrillers to screen include Earwig, Lucile Hadžihalilović’s English language debut depicting an eerie tale of a girl with ice teeth. Elie Wajeman’s The Night Doctor stars Vincent Macaigne, and portrays a doctor desperately trying to escape the stress of his job. The Restlessfrom director Joachim Lafosse explores the impact of bipolar disorder on even the strongest of relationships, while France is Bruno Dumont’s unpredictable satire of the media starring Léa Seydoux.

Witty comedies remain an ever-popular part of the French Film Festival programme, and this year’s highlights include the directorial debut from Nicolas Maury, My Best Part, about a young man who leaves Paris to return home to his over-protective mother, after setbacks with his career and boyfriend. Tralala from directors Jean-Marie Larrieu and Arnaud Larrieu depicts a 48-year-old singer-songwriter who leaves Paris and embarks on a journey with a new identity, after an apparent visitation from the Virgin Mary. Bruno Podalydès’s French Tech depicts Alexandre (Denis Podalydès), who is hired by a start-up which has a strict no-child policy, meaning he must lie to his formidable new boss (Sandrine Kiberlain).

Other films screening include Hold Me Tight, directed by Mathieu Amalric and starring Phantom Thread break-out talent Vicky Krieps; I Want To Talk About Duras from director Claire Simon, prolific maker of fiction and documentary films, who unpicks the relationship between Marguerite Duras and Yann Andréa; and The Summit of the Gods, an animated feature adapted from the original manga, following a photojournalist and a mountaineer.

In classic film, Hong Kong action-movie star Maggie Cheung, as a version of herself, plays Irma Vep in Oliver Assayas’s 1996 boundary-defying drama. In celebration of the late Jean-Paul Belmondo (1933 – 2021), the 1964 action-packed That Man From Rio is presented in a special tribute screening.

Finally, the festival’s annual retrospective strand features a focus on the work of actress Danielle Darrieux (1917 – 2017), offering the chance to see the stunning The Young Girls of Rochefort(1967) on the big screen, with Beating Heart (1940) and Madame de… (1953) screening in-cinema and online. Each film will be introduced by Ginette Vincendeau, Professor in Film Studies at King’s College London. The Darrieux programme is coordinated with the support of the Institut Français and the French Embassy Ireland.

Cinema tickets for the IFI French Film Festival are now on sale from the IFI Box Office on 01-6793477 and from www.ifi.ie/frenchfest. Individual screening tickets cost €11.50. Tickets to the opening night screening cost €15. Multi-film packages are also available for 5 and 10 films, priced at €50 and €90 respectively, only from the IFI Box Office. IFI@Home tickets are now on sale from www.ifihome.ie/page/frenchfest2021, with multi-film packages available from www.ifihome.ie/page/film-bundles/.