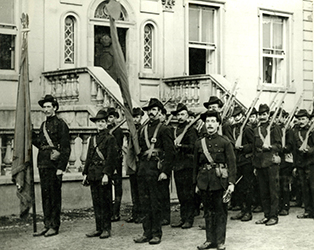 The Irish Decade of Centenaries programme 2012-2023 has provided multiple opportunities to find new ways of thinking about Ireland’s social and political heritage in the context of the events that took place in the 1910s and 1920s. Given the significance of this period of Irish history and the ongoing engagement with it in Irish and international media, we are delighted to host the Capturing Conflict symposium as a response to this. The symposium is part of a wider set of events including screenings of films from the IFI Irish Film Archive and guest talks from filmmakers. The events are hosted by the IFI and supported and sponsored by Maynooth University and Dublin Port Company.

The Capturing Conflict symposium organisers are inviting scholars and practitioners to reflect on films made during or about this period in history. While we are particularly interested in papers that consider films about the War of Independence and Civil War, we will also consider papers exploring representations of events in the 1900 – 1919 which relate to the fight for independence.

We’re inviting people to submit proposals for 20-minute presentations. Proposals should be 300 words in length, have a title and be accompanied by a 100-word biography. Please send proposals or queries to capturingconflict@gmail.com by December 15th 2021. Decisions will be made by January 31st 2022.