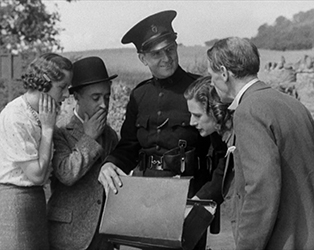 BLARNEY ON THE IFI ARCHIVE PLAYER

October 1st 2021: The Irish Film Institute (IFI) is pleased to announce that the digitally restored 1938 Irish film Blarney will be available to view on the IFI Archive Player at www.ifiarchiveplayer.ie for one week, in partnership with the Dublin Festival of History.

The comedy classic features much-loved Irish actor Jimmy O’Dea, playing a salesman working along the Irish Border who runs into trouble when he encounters jewel thieves. Cross-border rivalry plays out between a Garda, played by Noel Purcell (Moby Dick, 1956 and Mutiny on the Bounty, 1962) and a Northern RUC man. Shot in the County Louth villages of Carlingford and Greenore, the film uses the border as a playful plot device. On the centenary of the enactment of partition, the film is an intriguing artefact of cultural heritage which displays stoic attitudes to the existence of the border itself.

Blarney has recently undergone meticulous digital restoration by the IFI Irish Film Archive from source material at the BFI National Archive and UCLA Film and Television Archive, with support from the Creative Europe MEDIA programme. Speaking on the restoration of the material, Head of IFI Irish Film Archive Kasandra O’Connell said, ‘The Archive team is delighted to have worked with our film archive colleagues in the BFI and UCLA to produce this stunning 4k restoration of a film that seems as topical in 2021 as it did in 1938. While viewers can enjoy Blarney as just a charming comedy, it also provides a useful lens through which to consider the logistical impact of the Irish border on those living in close proximity to it. A topic that is more relevant than ever following Britain’s departure from the EU and the practical challenges that has created on the island of Ireland.’

The film, accompanied by an introduction from O’Connell and Head of IFI Irish Film Programming Sunniva O’Flynn contextualising the film’s history and restoration, is available to watch for free on the IFI Archive Player here worldwide, until October 8th 2021.