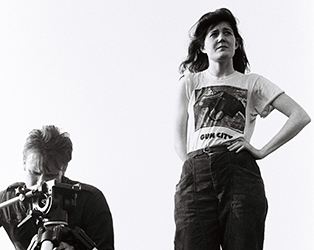 September 8th 2021: The Irish Film Institute (IFI) is pleased to announce that it has completed a major rebranding of its key digital platform. The IFI Player, launched in 2016 as a streaming library of collections from the IFI Irish Film Archive, now boasts new design and functionality across collections, bonus materials and virtual exhibitions, as the IFI Archive Player.

The IFI Archive Player launches with a new collection, F-Rated: Short Films by Irish Women, presenting 36 short films made over four decades, preserved in the IFI Irish Film Archive. The powerful selection of women-directed films is available to view free of charge worldwide at www.ifiarchiveplayer.ie, and via the IFI Archive Player suite of Apps, developed by Irish tech company Axonista.

The collection features short films from Trish McAdam, Claire Dix, Emer Reynolds, Kirsten Sheridan, Vivienne Dick, and more pioneering, imaginative Irish women filmmakers, with films and behind-the-scenes materials from 1983 to 2017. Many of the stories presented in the collection subvert mainstream narratives, through drama, documentary and animation, and offer a female gaze upon the lived experience of women in Irish society.

Debut works include Cathy Brady’s Small Change, featuring a collaboration with Nora-Jane Noone which would continue in recently-released Wildfire; the imaginative Joyriders, from Rebecca Daly who would go on to make the features Mammal and Good Favour; and Margaret Corkery’s Killing the Afternoon, presenting a series of vignettes depicting sun-seekers on a rocky Cork beach.

Bonus material showcasing new functionality on the Archive Player, and insights into the works of Irish women over recent decades, includes newspaper clippings from 1985 film The Drip, which starred Jack Lynch, Pom Boyd, Mannix Flynn and a young Aidan Gillen, and a postcard from Seamus Heaney after seeing Alice Lyons’s and Orla McHardy’s The Polish Language. Concept art for Louise Bagnall’s Late Afternoon and the script of Vanessa Gildea’s The White Dress are also available to browse.

Behind-the-scenes images include Andrea Harkin on the set of The Party, the 2016 film set in 1970s Belfast; Niamh Algar on the set of Missing Green, Anne Maree Barry’s 2013 short; and Jill Beardsworth on the set of Circus Man, the portrait of Ireland’s longest-running family circus. Joyous behind-the-scenes stills are presented from Bye Bye Now, a short about rural Ireland’s phone boxes from Aideen O’Sullivan and Ross Whitaker. Film stills are available to browse throughout the collection, from Mick Lally and Jemma Harris in Sonya Gildea’s Bua to Bríd Ní Neachtain preparing to jump from a tree in Clare Sa Spéir.

Speaking about the opportunities of the IFI’s newly-branded virtual viewing room, IFI Director and CEO Ross Keane said, ‘We are proud to be launching the redesigned IFI Archive Player, our cornerstone online platform which has provided global access to moving image collections from the IFI Irish Film Archive since 2016. Launching the platform’s new look and interactivity with this vibrant collection of short films by Irish women is particularly exciting, offering viewers worldwide the chance to delve into bonus material and behind-the-scenes insights from some of the country’s most sensational filmmakers.‘

CEO and co-founder of Axonista Claire McHugh, who recently joined the IFI Board of Governance, said, ‘Axonista’s interactive video adds a new and exciting layer of discovery to the IFI Archive Player. Viewers can now learn more about the films they’re watching, all within the IFI Archive Player experience.’

F-Rated: Short Films by Irish Women joins a wealth of other materials preserved in the IFI Irish Film Archive, which holds over 30,000 cans of film dating from 1897. Other collections currently available free-to-view worldwide include The Terence McDonald Collection, presenting films from the Derry-born teacher, collector and historian; The Irish Independence Film Collection, a treasure trove of repatriated newsreel material from British Pathé; and the Loopline Collection Vol. 2, which includes a six-part series on Mná an IRA, in which women offer personal reflections on the impact of their actions on the conflict in Northern Ireland and politics in the Republic.