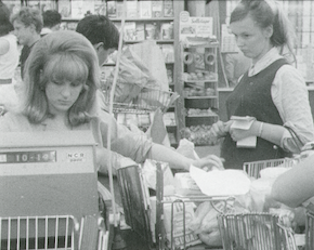 Earlier this year, the IFI Irish Film Archive was awarded funding by the Heritage Council for the digital restoration of Ciall Cheannaigh, a 1969 observational documentary made by the GFS Film Group, an offshoot of the Guinness Film Society. This twelve-minute film, featuring a soundtrack by Donal Lunny, traces a day in the life of a supermarket in Ireland’s first suburban shopping centre and is both an important sociological document and an entertaining piece of filmmaking.

Having received strong reviews for their first film, Liffey Faces (1969), the Group, led by producer Mike Lawlor, decided to make a short that they could enter in the 1970 Oireachtas Film Competition. They chose to film shoppers and staff, verité style, at the Dunnes Stores supermarket in Cornelscourt, a suburb in south Dublin. The Group’s camera operator, Ries Hoek, filmed throughout the summer of 1969. Budget constraints necessitated the use of 16mm black & white stock.

Cornelscourt Shopping Centre was established by Dunnes Stores in 1965, making it one of the earliest of its kind in Europe. With acres of parking space, it catered to consumers who were now getting about in cars. Ciall Cheannaigh begins as early-morning shoppers pull into the car park and ends as the last drive away at dusk. In between, we follow customers as they steer their trolleys and shepherd their children down the bustling aisles of a large supermarket, all the while enjoying the myriad attractions of a new kind of emporium. The film offers both an enthralling slice of suburban life in the late 1960s and a unique sociological record that documents changes in consumer habits as Irish society became increasingly urban.

Playful and richly textured, Ciall Cheannaigh won the Oireachtas competition, which was adjudicated by Louis Marcus and Robert Monks. A second award, from the National Film Institute, followed soon afterwards.

Although Ciall Cheannaigh has been screened at the IFI several times since its acquisition, its accessibility has been limited by its format and by the need to protect existing copies. The three prints held by the IFI are over fifty years old: wear and tear have produced a variety of scratches and other damage, including tramlines, ‘sparkle’ (emulsion loss) and an accretion of dirt and flicker. The grant from the Heritage Council will allow the IFI Irish Film Archive to produce a newly restored digital version which can be made widely available in cinemas and online.

The process will begin with the ultrasonic cleaning and 2K scanning of all three prints. Following comparison of the scans, individual sequences will be combined to produce the best version for restoration, which will include stabilization, grading, conforming, automated dirt removal and manual repairs to individual frames.

As no separate sound elements survive, the prints will be over-scanned in order to capture the optical soundtrack, which lies along the edge of the film; selections will be made from the resulting audio files to produce the best possible soundtrack.

Restored image and sound will be rendered to 2K 4444 XQ ProRes files in order to preserve the film’s dynamic range. DCPs will be produced for exhibition, and DPX and sound files will be preserved at the IFI Irish Film Archive. Because film itself is the best preservation format, we hope to be in a position to print to new stock at a later date.

The project is due for completion in October 2021.