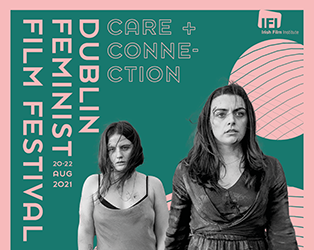 August 9th 2021: This year, the Dublin Feminist Film Festival comes to the Irish Film Institute (IFI), and goes online at www.ifihome.ie (IFI@Home) August 20th – 22nd, with a selection of features, shorts and masterclasses centred on the theme of care and connection.

In-cinema screenings at the IFI as part of this year’s Dublin Feminist Film Festival include the debut theatrical screening of Cathy Brady’s IFTA-winning Wildfire, on Saturday August 21st at 18.30. Set in a Northern Irish border town, the dark thriller follows two sisters played by Nora-Jane Noone and the late Nika McGuigan, posthumous recipient of the IFTA Lead Actress – Film award. The DFFF Short Film Programme screens at the IFI on Sunday August 22nd at 18.30, and is also presented online on IFI@Home. This year’s selection of shorts presents an immersive, diverse selection of films from New Zealand-produced On The Couch With My Depression to Janna Kemperman’s Irish short Hen.

Available to rent on IFI@Home for the duration of the festival are a range of feature films displaying care, connection, freedom, and belonging. Women-led films about indigenous communities include Vai, a portmanteau feature film made by nine female Pacific filmmakers, filmed in seven different Pacific countries. Nudo Mixteco is set in a Mixtec community in San Mateo, and tells the stories of three characters, returning to their hometown for different reasons, navigating rejection, movement and desire. These online screenings are both Irish premieres.

Films in this year’s programme which focus on Palestine include the video essay Letter to a Friend and documentary Afterward. In Letter to a Friend, Palestinian artist Emily Jacir writes to a friend about home – space, place and sound. In Ofra Bloch’s Afterward, Bloch travels to Germany, Israel and Palestine, navigating how, as an Israeli-born filmmaker, she is seen as a victim in Germany and a perpetrator in Palestine, examining trauma, psychological cycles of hate, and hope.

Italian films screening online as part of DFFF 2021 are Darkness, a film about girls trapped inside the confines of their home, anxious about venturing outside, and Maternal, a drama set in a women’s refuge in Buenos Aires, featuring a kind nun, Sister Paola.

An online festival bundle, offering the five feature films, video essay, and the shorts programme, is available for only €49.99. All features presented online on IFI@Home are Irish premiere screenings.

Two Dublin Feminist Film Festival masterclasses will take place online, across Saturday 21st and Sunday 22nd, via Zoom. On Saturday at 14.00, Song for a Raggy Boy and Maudie director Aisling Walsh will conduct a directing masterclass, Stories From the Front Line. On Sunday at 14.00, Maeve Murphy, award-winning screenwriter and director of Silent Grace, will conduct a screenwriting masterclass, Writing with Care: Empathetic Connections in Films about Real Events or Living People. Both festival masterclasses are free to attend, with limited places available.