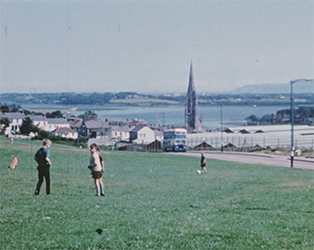 June 17th 2021: The Irish Film Institute (IFI) is delighted to announce a new collection of films from Derry filmmaker Terence McDonald, available to view for free worldwide on the IFI Player. Inventive works from the creative filmmaker, historian, teacher and collector are available to view at www.ifiplayer.ie and across the IFI Player suite of apps.

This collection of Terence McDonald’s (1926 – 2001) films includes short comedies, inspired by Buster Keaton and Charlie Chaplin, experimental films and documentaries. McDonald’s works cover varied social topics such as theatre, travel, community and mental health; this new collection on the IFI Player presents twenty of his innovative films, many of which display Northern Ireland as a hub of cultural activity. Having worked as a cinematographer, editor, sound recordist, producer and director, McDonald’s films boast visually sophisticated camerawork and technical prowess, with most shot on 16mm film. They have received widespread recognition from the British Film Institute (BFI), the Munich Film Festival, and the National Film Institute (now IFI). This selection of films is made available in collaboration with Northern Ireland Screen.

The collection is presented alongside an introduction from Terence McDonald’s son, Peter McDonald, in conversation with IFI Head of Irish Film Programming Sunniva O’Flynn. Speaking about this collection of pioneering works from the Derry filmmaker, O’Flynn commented, ‘This is an extraordinary body of work made by an amateur filmmaker with the vision and skill of a professional – a man who undertook all the technical aspects of production himself, but who aligned with a number of formidable collaborators, most notably John Hume, to document the city of Derry and its inhabitants with profound acuity and affection. It’s a great pleasure to share this varied collection with audiences throughout the world via the IFI Player.‘

The collection includes several short documentaries about the city of Derry made by McDonald in collaboration with Nobel Peace Prize-winner John Hume, then a teacher and civil rights activist. The films – A City Solitary, The City of Londonderry and Two Hours from London – explore the history, economy and culture of Derry and environs, promoting the region to tourists, documenting the expansion of the city and encouraging investment in local industry.

The Parish Centre, set in County Donegal, and Ballinascreen, set in County Derry, both made with Father Michael Collins, display a sense of place and locality, representing beautiful landscapes alongside progressive social changes in these rural communities. Father Cyril Farrell, prior of the Benburb monastery, was involved in the creation of McDonald’s spiritual films, writing both The Secret (featuring the voice of Gate Theatre co-founder Micheál MacLiammóir) and the cross-community play The Story of Man, which was the subject of the behind-the-scenes documentary Benburb.

Farrell also wrote The Stones Will Speak, a film narrated by residents of the west coast of Ireland, displaying outstanding imagery of Achill Island and Kylemore Abbey. The ethereal voice of Northern Irish folk singer Gemma Hasson features in the score of The Stones Will Speak, as well as across the soundtracks to Long Hard Road, a film promoting the social improvement projects in Northern Ireland, and Requiem for Sally, a short drama reflecting on parents’ grief.

Slapstick comedies The Fugitive and The Man from A.U.N.T. make full use of Derry’s inherently dramatic cityscape, and pay homage to the golden days of silent comedy. The films were originally screened during the intermission of local pantomimes organised by Father, later Bishop, Edward Daly. The jaunty short Film Club Antics takes a jovial look at an amateur film production, filmed on the Magee Campus of Ulster University.

Social changes are a cornerstone of many of McDonald’s short films. Changing aspects of spirituality are captured in The Option, a short documentary examining the role of the Priest in 1960s Ireland, written by Seamus O’Connell. Changing attitudes toward mental health are depicted in The Open Door, which tells the story of a character burdened with the stresses of modern life, who checks himself into the Gransha Psychiatric Hospital.

Gerry Wills was another writer of scripts for McDonald, credited for internationally successful Nebelung, a dark film following the distressed mental state of a German language teacher. Wills narrated The Portable Theatre, a documentary on one of Ireland’s last travelling theatres.

Comparable to the films of fellow Northern Irish filmmaker Roy Spence, experimental fantasy-horror is explored in ghost story The Twilight Belle, filmed on the Five Finger Strand in Donegal, and Zwischen uns sei Wahrheit, a light-hearted drama turned graveyard-set horror. Finally, The Best Man is a feature-length black comedy directed by Joe Mahon, about a newly sober groom who tries to resist the attempts of his best man to lead him astray.

The Terence McDonald Collection is held and preserved by the IFI Irish Film Archive and these films are made available by the kind permission of Peter McDonald and NI Screen.